The latest technology utilizes ablative fractional CO2 lasers that treat only a selected facial area. By firing micro ablative columns of laser energy at the skin, rather than treating the entire surface of the skin, the fractional laser leaves columns of healthy, untouched tissue between the areas that are ablated — resulting in less discomfort, downtime and risks. Fractional CO2 laser resurfacing has nearly all of the benefits of the traditional CO2 laser, but dramatically less downtime, and much lower risks of complications. This new technology was rated the #1 anti-aging breakthrough by WebMD. 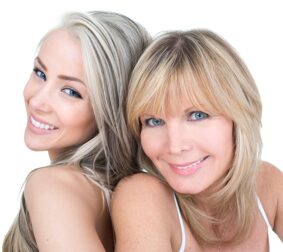 The skin then heals over a period of time, as new layers of collagen are produced. The skin can literally resurface itself, causing an improvement in the appearance of sun damaged or acne scarred skin. After the treatment, the skin will look much healthier than it did previously.

This intensive treatment can significantly reduce the appearance of lines, wrinkles, and pigment (or skin color) changes on the face, neck, and other parts of the body. They can be used in sensitive areas, such as lines around the lips, eyes and even eyelids, or over the whole of the face. Acne and other types of scars and certain stretch marks can also be improved.

Non-ablative lasers have been a more recent introduction in types of aesthetic equipment for skin rejuvenation. These lasers have lower energy levels than ablative lasers (which resurface or remove the outer layer of skin completely) and try to cause damage within the dermal layer of the skin without removal of the outer epidermal layers. That is to say that the laser treats the layers of skin under the surface without damaging the surface too much.

It is thought that the laser’s heat in the dermal layers causes collagen to be produced which helps reduce the appearance of lines and wrinkles. However, the results from this type of procedure are less obvious than those which can be achieved with ablative laser skin resurfacing in Gainesville, FL during which the surface of the skin is removed.

Most patients need only one or two treatments. People with extreme acne scarring may need two or three treatments. Touch-up treatments can be done very quickly and cost-effectively.

We utilize the Fitzpatrick Skin-Type Chart to determine skin type. For this treatment, we can safely treat skin types 1—3. Fractional lasers cannot be used on skin types 4 through 6 because they remove melanocytes, they are the cells in your skin that provide your pigment — thus risking a change in skin pigmentation.

Many patients compare the actual treatment to having a rubber band popped along the skin, however, discomfort will vary depending on treatment areas and the pain tolerance of the patient. After treatment, the treated areas may be swollen, raw, itchy and feel similar to a sunburn.

Procedures are done in the office under local anesthesia (numbing cream applied to area to be treated) with the patient awake.

Patients can expect between 10 and 14 days of downtime and redness for 1 or 2 months.

Yes. You can have a micropeel that removes the outer surface of the skin for a refreshed glow—or a very intense treatment that gets rid of five to seven years’ worth of sun damage and wrinkles.

We ask patients to come in an hour before the procedure to allow time to cleanse the skin and apply an anesthetic cream to numb the tissue in the area to be treated. Most patients get their whole face treated.The actual time for the procedure depends on the area(s) being treated:

Fractional CO2 laser treatment will last five to seven years. You can help maintain the improvement in your skin by:

After a fractional CO2 laser treatment, you should refrain from exercise for 10 days.

To help prevent a cold sore outbreak, we give patients the antiviral drug Zovirax (acyclovir) for several days before and after a fractional laser treatment. Nearly 80 percent of Americans have the cold sore virus — many just don’t know it until they get a wound or a treatment around their lips.