A brachioplasty (often spelled brachiaplasty) is an operation aimed to improve contours of the upper arms through a combination of liposuction and direct excision of tissues. Though it is some times done as an isolated procedure, it is typically performed in patients who have had significant weight loss. In these patients, the arm lift or brachioplasty is performed as part of a series of operations on the abdomen, buttocks, arms and breasts to re-contour a patient’s entire body. Redundant fat and skin from the upper arms is removed through an incision concealed in a natural crease where the arm meets the axilla (a short scar brachioplasty). For patients with more severe laxity and tissue redundancy, an incision may need to be extended along the medial aspect of the upper arm. Incisions are anchored to deeper structures of the arm to prevent the final scar from spreading and migrating inferiorly. 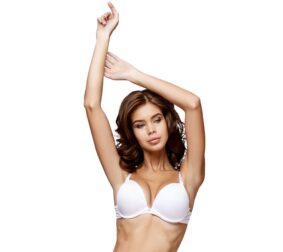 Patient is 63 years old, 5-foot-8 inches in height, and weighs 174 pounds. Due to a significant amount of weight loss, this patient has a substantial degree of skin laxity to their upper arms. She underwent bilateral brachioplasty surgery to reduce her excess skin.

If performed as an isolated procedure, brachioplasty can be performed as an outpatient at John W. Tyrone M.D. Aesthetics & Plastic Surgery’s Ambulatory Plastic Surgery Facility located in Gainesville, FL. As with any surgery performed by Dr. Tyrone, you will have a thorough understanding of the procedure before entering the operating room including what you need to do prior to and after the surgery. Brachioplasty patients are typically seen 5–7 days after their procedure. Normal activities may be resumed approximately 3 weeks after surgery.